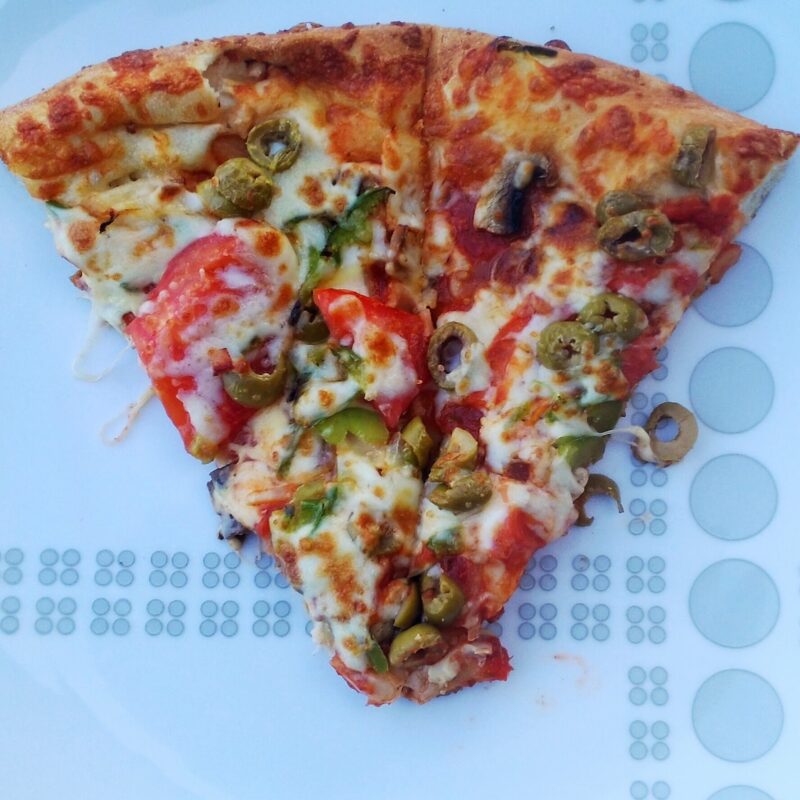 I grew up in a house where what’s for dinner depended on where kids ate for free that night.  We did get healthy meals too, but I grew up thinking it was OK to eat out multiple nights a week.  I could spot the golden arches a mile away and would beg for Dairy Queen even though I was lactose intolerant (yes Dad, it was worth it).

It’s little wonder that when I moved out on my own I would hit up the drive through on my commute home.  Or that after having a baby and not sleeping I would prefer take out to cooking from scratch.

I think I have a pretty normal story.  After all, I had lots of company at the drive through!

It might be normal, but who wants to be normal?  I tend to think that I’m capable of smart choices, but there I was paying $20 for a couple of burger combos.  Night after night I was choosing to put on weight and waste my money.

We got things under control.

This summer we were back and forth between cottages, camping and visiting family.  Because we didn’t want food to go bad, grocery shopping became more sporadic.  We went two months without looking at our spending.  Fast food crept back in.  At first it was an innocent “oh, let’s just take the night off and use these two can dine coupons we got in the mail”.  I’m ashamed to say that soon it became a “what’s for dinner”, followed by a knowing look, then an easy resignation “OK, I’ll go out, what do you want to drink?”

If you’ve been finding yourself unwrapping your dinner much more than you’d like, you should be ashamed too.

We fell off the wagon, but we’re not out of the game.  Our habit isn’t out of control, our budget wasn’t destroyed and we don’t need to buy new clothes a size up.  We recognized our excess and got back on our program.  We focused on how we wanted to live our life.  We want to raise our daughter to have healthy eating habits and to be able to recognize an indulgence.

We faced reality.  Our excuses to justify getting fast food just weren’t true.

A two can dine for $11.99 meal deal at McDonald’s where we live comes out to $13.55 with taxes.  That’s before we add a cheeseburger for the Little Miss.  Or even more, a whole Happy Meal.

Don’t believe me?  Take a look at my Spinach Tomato Pasta recipe with a cost per serving of only $0.95.  You can’t even beat that with a burger and fries off the value menu!  For $13.55 for two, there’s a rediculous number of recipes available.

When you buy fast food you don’t need to cook.  So it’s easy.

But, cooking is easy too.  It’s another thing, like your money, that is only as complicated as you make it.  If you’re trying to replicate a dish from a fancy restaurant, you’ll likely come across a few challenging bits.

Boiling water too difficult for you?  Stock up on some frozen meals meals for those days when everything just seems so hard.  They’re only a couple bucks each and they’re arguably healthier too.  Stab with a fork and push some buttons.  You don’t even need to leave the house.

Our number one excuse was that fast food is quick and we want to eat right now.

Take a look at the list above.  How long does it take to pour a bowl of cereal or make a peanut butter sandwhich?  I’d say the longest dish would be pasta and a jar of sauce.  It takes, what, 15-20 minutes?  For 15-20 minutes you could also fry up some meat or fish and cook up a side of rice and veggies.  That’s a pretty substantial meal that doesn’t take much time.

We’re not against eating out.  We like the indulgence once in a while when it fits in our budget.  But, I’m not proud of the amount of fast food that we have bought over the years.

We’ve had lots of excuses why we would cave.  But, I don’t think we ever really believed fast food was cheaper, easier, or quicker than whipping something up at home.  What it really boils down to is that sometimes we can be lazy and stuck in our habits.

We’ve gotten back on track with a more attention to our spending, meal planning and some extra planning for emergencies.  But, to guarantee success, we’ll need to keep questioning ourselves whenever we think we want take out to see if we’re just acting out of habit or if we would really enjoy the treat.

Are you a fast food fan too?

Do you have a guilty pleasure that you’ve got under control?